Government as Savior: A Tower of Babel

Posted by jefferis on September 11, 2015 in Culture, Political Events, Religion

A Tower of Babel – 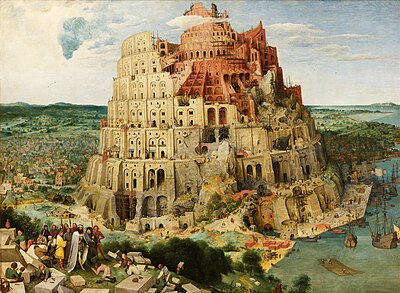 Government as Savior?
A reprint of the Scholars Corner from 2009

The story is told that the ancients wanted all their problems in life solved, so they came together to form a vast, human government. They built a walled city for security and a tower to reach into heaven, so they could attain eternal life without God. But seeing their arrogance, Heaven sent confusion into their midst to prevent them from building an empire. Today, it seems, that our nation’s leaders have been touched by that same finger of confusion, with all their babbling plans, arguments and indecision. If God intended to destroy our trust in human government, he is certainly doing a good job.

The debate we currently face as a nation is not over healthcare, or greenhouse gases, or jobless recoveries. The real debate taking place among us is whether government is the solution to our problems, or a cause of them. The Founders of our nation believed that government’s tendency over time was to encroach upon the liberties of the people, to become corrupted by power and to become oppressive. Therefore, they established a limited form of government, which could provide the opportunity for us to prosper, but which could not guarantee it.

Since the dawn of the Progressive Era under Woodrow Wilson, however, a different philosophy of government has taken hold. The Progressive belief is that government is the solution to humanity’s problems: that government, and its bureaucracy, has the means, the power, the responsibility, and the wisdom to fix our social problems and provide for all our basic needs. But in the hearts of the people there is a rebellion brewing as this century-old belief in government “progress” is falling on the sword of economic reality. Government cannot be our savior when its policies create massive debts the people cannot repay.

The Beltway has become the wall to this modern Babel city, built to keep the politicians secure and the people out. Our leaders have deluded themselves into thinking that they can control the future through spending and programs, while the common man from outside these gates looks at this city of confusion in disbelief and wonders “where will it all end?”

Babel was abandoned, the people scattered, and their grand tower into heaven left unfinished. If we fail to recognize the limits of our power, we also may suffer the same fate.

~~~~~~~~~~~~~~~~~~~~~~~~~~~~
Comment: We are trying to fix our problems while at the same time as a nation we are rejecting God, God’s help, God’s ways, God’s wisdom, and God’s laws. Perhaps the confusion is God’s ordained way of bringing us to collapse and to our knees so that we will finally realize that license is not liberty, and “righteousness exalts a nation, but sin is a reproach to any land.” If the people lose faith that their government can actually fix things, then they may finally turn to the One who truly can. Without some great Awakening and national repentance, there is not enough will or wisdom in the country to save us from what we ourselves have chosen. John Calvin said that God gives us the leaders we deserve. God help us, for we have voted ourselves into this mess by deceiving the people into believing that government is truly our savior. That is an idolatry, like Babel, that God cannot allow. And the healing of it may be the destruction of the very idols in which we have placed our trust.

← My Love Affair with Apple May Be Over :-(
Esau’s Porridge: Federal Health Care and The Loss of Liberty →